A more in depth look at individual cactus species, a new one is added each month -managed by Hob
Post Reply
11 posts • Page 1 of 1

Nobody seems to be coming up with a new genus though we are well into the month, so what about Notocactus, now often sunk into Parodia? It is out of favour in many countries due the quest for more recent novelties yet still are easy to grow excellent flowering plants.

An unusual plant. A red flowered member of the N. mammulosus/submammulosus group that actually exists as a population in habitat, unlike N. ottonis venclusianus which has not been found in habitat, therefore is probably a cultivar. However in theory any cactus with some red in the outer petals can throw a totally red flowered sport, so that may be how this population arose:-

Very good choice! One of my favorite genera. The blame probably falls on me for not picking a genus but things are crazy between work and other stuff.
So far i'm down to ottonis, mammulosus, agnetae and schlosseri while still tracking down rutilans and uebelmannianus.
Your Notocactus submammulosus ssp. minor is absolutely beautiful!
There are more cacti in heaven and earth, Horatio, than are dreamt of in your philosophy.
One of the few cactus lovers in Lebanon (zone 11a)

This was it before it was named:-

Excellent choice! These are nice & easy to grow plants, outdoor or indoor located.

This species is one of most common ones.

Sometimes occasionally they develop offsets that can be detached when get big enough.
If your cacti mess in your job just forget about the job.
°C = (°F - 32)/1.8
Top

These first ones came to me as seed from Andreas Hofacker many years ago. He collected in habitat but whether the seed was collected, or off cultivated plants I do not know. The flower colours vary from what is usually found under those names, therefore whether they are natural variation or from hybrid seed I do not know.

This one is said to be a Prestle name. Prestle named as new almost every small variant he found and I am not sure many were in fact published. ThereforeI have no information other than that for it. Edit: just found a reference to it in this link as PR 319a, looks like just another N. uebelmannianus form to me:-

Notocactus herteri, which does seem true to type. Unfortunately this was the only flower to open just before I went to Spain on holiday and all the other buds were over when I got back.

I only have two of this genus, N.scopa and N.magnificus, neither of which have flowered for me yet. The latter is technically my housemate's plant and etiolated in our last house. It then also grew a cluster of offsets which started to uproot the parent! I cut off and re-planted the top of the adult, which has grown wonderfully since, and kept two of the offsets which seem destined to be plagued by mealy bugs on their roots! I haven't taken a photo of the larger one for a couple of years, this shows it in 2016

Also, my Dad's slightly odd Notocactus with red tinged flowers and doubled middle. I think it's N.scopa, and he says that name "rings a bell"

Not sure it is N. scopa Grimm but may be the white spined form of N. sucineus (which is normally yellow spined). N. sucineus is part of the N. scopa group along with a few other similar Notocacti. I gather N. scopa is quite variable in habitat, but we have all got used to the "standard scopa" of cultivation as being the "correct" one.

Thought i'd add my plants but i forgot to take flower photos last year
A part of the bunch:

N. Ottonis that flowered in fall so i moved it to my cardboard growing box. The flowers opened and closed for 2 days but never opened completely. Turned out it was self fertile.

What i believe to be concinna ssp agnetae:

What i have labelled as mammulosa ssp brasiliensis. Grown in full sun and this is as big as the spines ever got

There are more cacti in heaven and earth, Horatio, than are dreamt of in your philosophy.
One of the few cactus lovers in Lebanon (zone 11a)

Seedlings of N. mammulosus, from that one with offsets pictured above. Started to grow already at room conditions. These are ~ 2 y. old, pretty easy to grow but needing soil change and transplanting every year for best results. 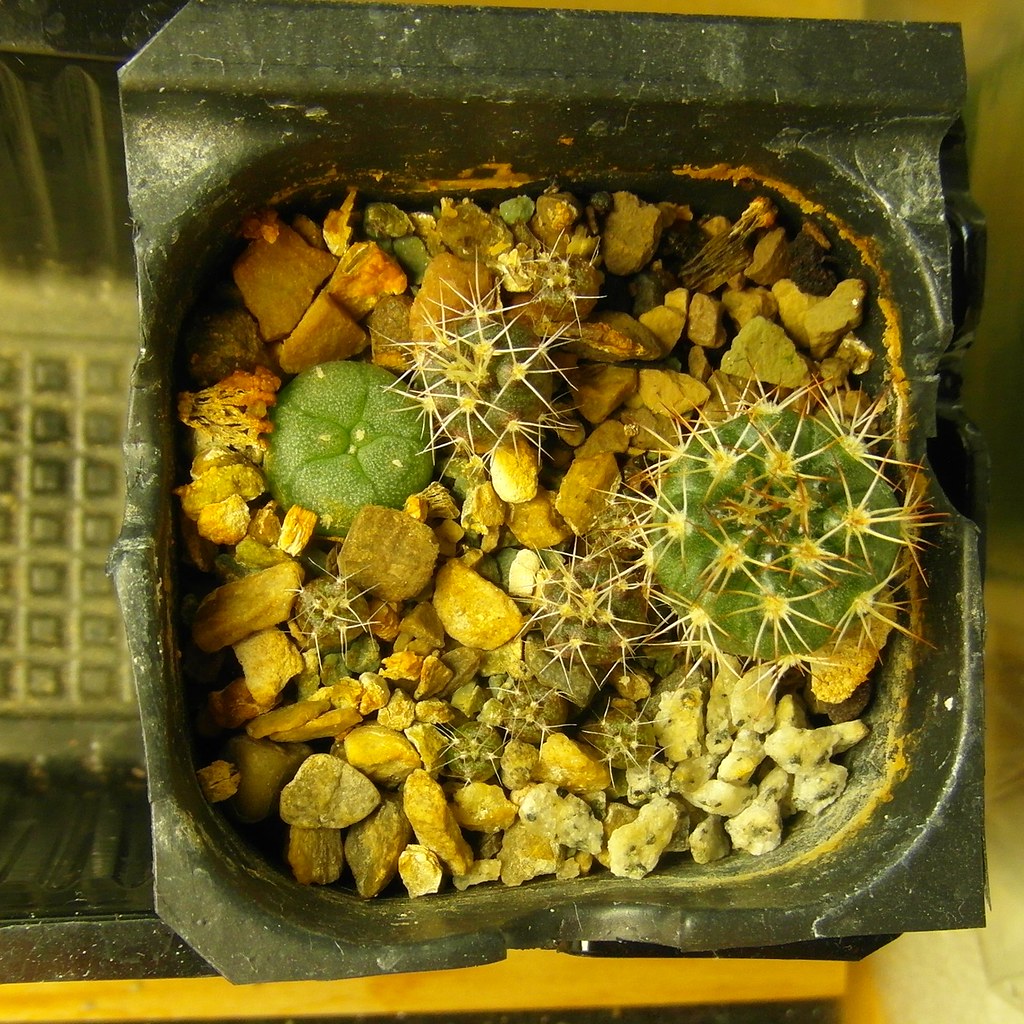 These seedlings (sharing a pot with a Lophophora) are from N. turecekianus, different ages because of prolonged germination. Many consider that a different species even with some doubt: "Questionably distinct from P. mammulosa, but spination is distinctive and said to have different habitat preferences." - D.R. Hunt, NCL, p. 224.

This is the mother plant which I took some seeds from (not my plant). The spines are really impressive!
If your cacti mess in your job just forget about the job.
°C = (°F - 32)/1.8
Top

It is March again and maybe a time to show off some Parodia photos.