A more in depth look at individual cactus species, a new one is added each month -managed by Hob
Post Reply
11 posts • Page 1 of 1

Not sure about the situation in other countries, but this unusually beautiful Mamm is rarely encountered in US collections. When I found mine at the California Cactus Center in 2012, it was pure luck that I happened to be in the right place at the right time. Here's the plant with what I believe was its first-ever flush in early April 2013: 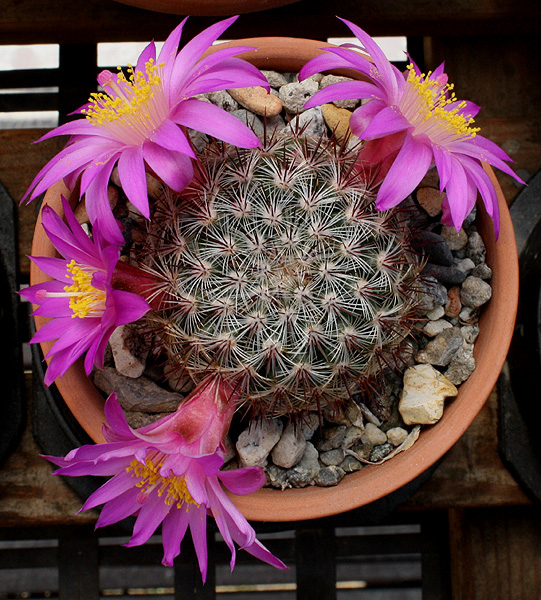 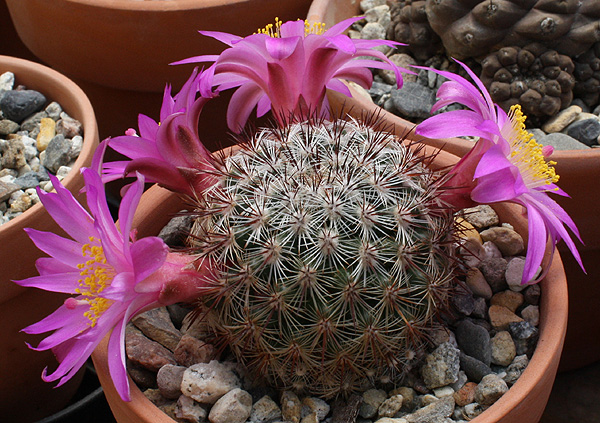 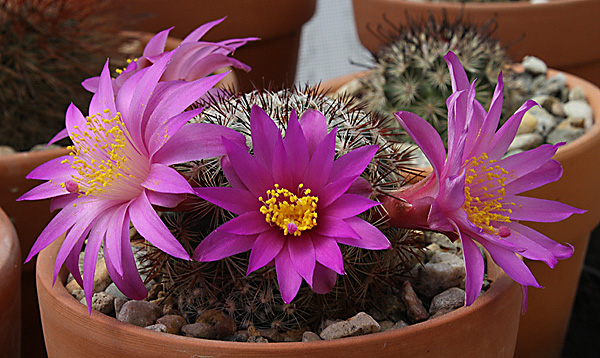 Going from then to now, my deherdtiana has shown a propensity for A. producing a steady supply of flowers every year, and B. rather prolific offsetting (typical for the species under cultivation). Here's the latest -- an early Easter present from last weekend: 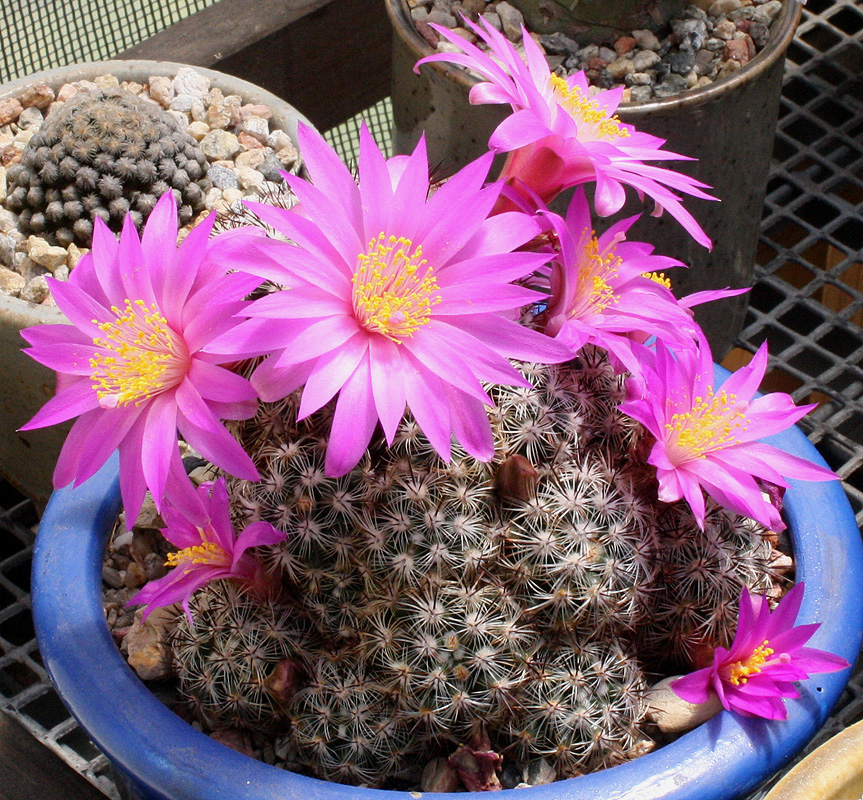 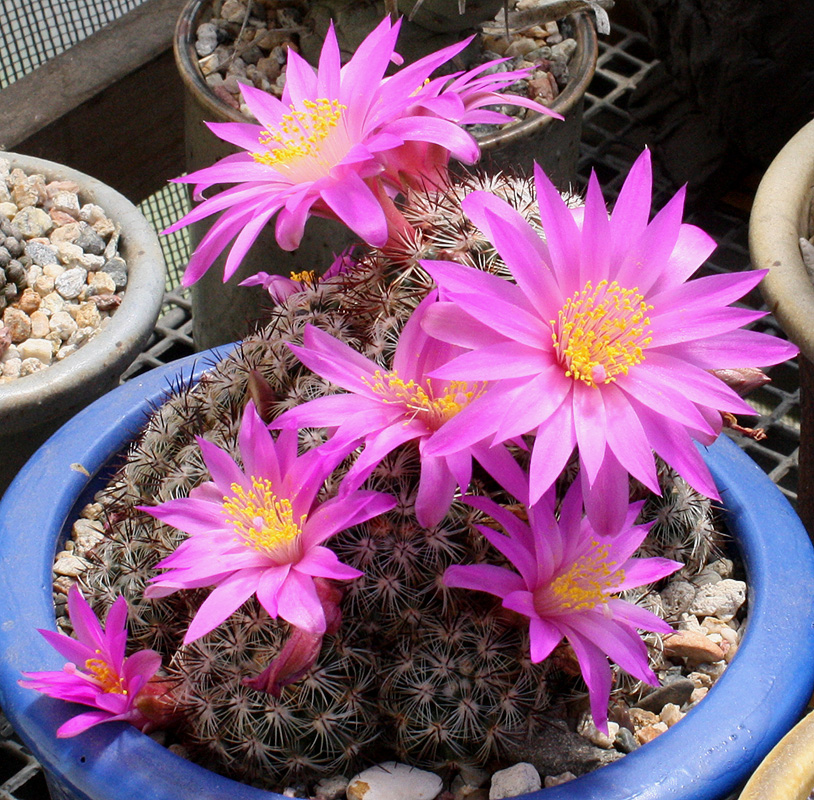 And yes, a few of those flowers are cristate -- the first time I've seen it in 5 years of blooming. What a fantastic display!
If you just want photos without all the blather, please visit my Flickr gallery.
My location: Los Angeles, CA (Zone 10b)
Top

In the UK it also seems to now be rarer in collections than when it along with Mammillaria dodsonii were first introduced. They are also not that easy to get hold of unless you grow from seed because the nurserymen are not propagating them as they used to. Nurserymen tend to grow what is selling and that usually means the latest introductions for collectors and the "bread and butter" plants for casual buyers at garden centres. Unfortunately M. deherdtiana and M. dodsonii don't seen to fall into that category anymore, although two of the choicer large flowered Mamms.

The other plant that quickly faded from the scene was Mammillaria goldii, one of the Mammillaria saboae group, because unlike it's cousins it was far more tricky on it's own roots and not even common on a graft either.

Actually, I should be more specific in saying that I have a deherdtiana dodsonii (CactiGuide lists it as subsp., while Llifle.com has it as var.). M. deherdtiana and its subspecies (or variety if you will) are among the slowest-growing of Mammillarias, so I'm sure that would explain why we rarely see them. Mine is on the verge of filling its pot, and I'll be happy to "spread the wealth" by removing the outer layer of pups before I send them off to Desert Creations in Northridge CA. Unfortunately the pups are firmly attached to the parent stem, so a bit of surgery will be required. No way I'd even think about doing at as the growing season is underway, but the upcoming winter should be a good time for this procedure.
If you just want photos without all the blather, please visit my Flickr gallery.
My location: Los Angeles, CA (Zone 10b)
Top

Mine is flowering this week as well
Maybe I can a photo before it's done.
Mine is a little different, no central spines and no pups.

It flowers every year and is a slow grower, but not in the super slow category IMO.

Steve, those photos are very good, super sharp with good contrast.
I wish I could get the same out of my system

Is that a Mammillaria theresae loaded with buds in the fourth photo?
I've never seen so many buds on a Mamm.

Great to see the Cacti of the Month back in session!
http://www.CandDplants.com

C And D wrote:Is that a Mammillaria theresae loaded with buds in the fourth photo?

Great to see you back on the forum! And yes -- that's a Mamm theresae, although it wasn't setting buds yet. It is now, 3 or 4 at the moment. If I catch the theresae with flowers on camera, that could be our cactus of the month for May.

By the way -- when I perform the "pupectomy" on my Mamm deheredtiana dodsonii this winter, I think I'd rather ship the pups as a small gift from me to you. You're a good friend, and no disrespect to Desert Creations, but it'll be nice if you get those pups instead.
If you just want photos without all the blather, please visit my Flickr gallery.
My location: Los Angeles, CA (Zone 10b)
Top

Do you sharpen your photo's in post processing Craig? that can make a lot of difference in digital images.

Steve
I'm not sure why you want to depup your plant, you should just let it clump into a giant show plant.
I would recommend any cutting on cactus being done during the growing season, that way the plant will heal faster and without fear of rot.
Also the cuttings won't root in the Winter.

Now that I look closer, and with a different computer screen, I can see that those aren't buds on the M. theresae, just small tubercles.

Mine isn't so good looking, it had some damage a couple years ago that has grown out.
Just missed the flowers,
but the Mammillaria blossfeldiana behind it is starting to put on a show
Those flowers are for sure in the Top 10 for Mammms

Maybe next Year it can be Miss April
http://www.CandDplants.com

I have tried M. deherdtiana a few times (from SuccSeed and ADBLPS) but have not had much luck in germination of the seeds.
Top

C And D wrote:I'm not sure why you want to depup your plant, you should just let it clump into a giant show plant.
I would recommend any cutting on cactus being done during the growing season, that way the plant will heal faster and without fear of rot.
Also the cuttings won't root in the Winter.

The problem is that I don't have enough growing space to move the plant into a wider pot, so there's a practical reason for removing the pups that are about to grow beyond the edge of the current pot. With that said, I'm not married to the idea that I should do it this year, but I'll assess the situation at the end of summer. Sooner or later those excess pups will need to come out -- there's a very good reason for doing this in winter, although I'll save the details regarding the "how" and "why" of the process for when the time is right to do the deed.
If you just want photos without all the blather, please visit my Flickr gallery.
My location: Los Angeles, CA (Zone 10b)
Top

one last flower decided to wait until this week to bloom

Personally I'd let your plant get as big as possible and only take a few pups off if you do. They are so cool in a clump and rare as a big plant.

But if you have extra pups I'll trade you for them ..

BTW I think you could use a M lenta do you have one? Another totally cool flowering mammillaria. And I just happen to have a few small plants